This is a continuation of the Dictionary Challenge previously completed. To follow along, you should read that post here.

So, we have already downloaded a free Webster dictionary but completely unformatted and unstructured. So, we created a new file in a more structured way that our program can process. The code is in the previous post. Let’s see how this new “curated” file looks now…below is a snippet:

There happens to be over 110,000 words! And a few extra things I had to do to create this curated file:

To fulfill the above requirements, I needed to do some manual post-clean-up but it wasn’t so bad since most of it was already cleaned by the code.

Now, this file is looking great! We can actually start to read this dictionary and start producing some metrics! Let’s do it… 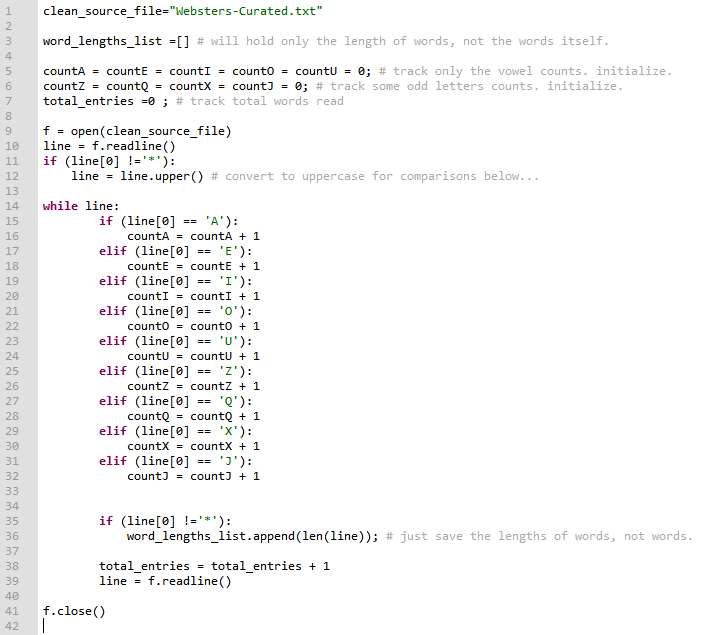 To make it easier of my PC (don’t have a fast machine, or tons of RAM!), I read the dictionary file line-by-line and instead of storing all the words, I calculate the length of each word (in this case, a line == a word since that’s how I created this structured dictionary file in part 1), then only store the length in a list word_lengths_list[]. That way, I can generate almost all the metrics I want. Also, I declare some simple integer variables (there are fancier ways to do this, but I opted for simplicity here) and if the first character of each line (i.e. word) starts with that character I’m interested in, I increment the counter. So, in this case…all words starting with vowels, words starting with Z, Q, X, and J (because I find those to be “odd” and interesting). In the while loop, I also keep count of total words read in total_entries variable.

NOTE: In Python, indentation is EXTREMELY important. Pay attention to the if, while, open, close statements’ locations above. Having the image snapshot above of the code allows me to show exact indentation. Any change to that will change the logic and flow and the program will not generate the expected output.

In lines 11 and 35, you’ll notice I check for “*” character and don’t do anything if the line starts with it. That’s because after my first program created the curated file, I manually added some comments for myself starting with “*”. So, we don’t want to use those lines for our measurements.

Now it’s time to show all the loaded variables by the simple print() statement. We convert the integer values to strings str() function for printing in the same statement.

We have enough information in memory at this point to also find the MAXIMUM length of a word that appears in my curated Webster dictionary, the AVERAGE length of ALL words, and the TOTAL number of entries…

And tada! Here’s our much sought-after answers! 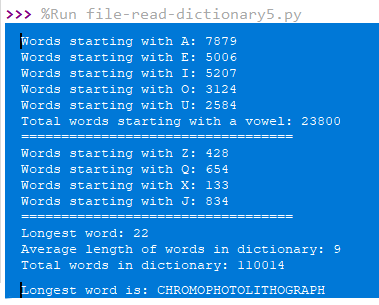 HINT: One way is to write another piece of code that relies on this program’s knowledge that longest word is x characters, and search the dictionary for that specific length and store ONLY that word instead of hogging the memory with 110,000+ words.

That’s what I did later to the program to generate the longest word in the output (see above).

Remember, our challenge was to:

Now we have achieved ALL our goals!

5 thoughts on “The Dictionary Challenge-Part 2”